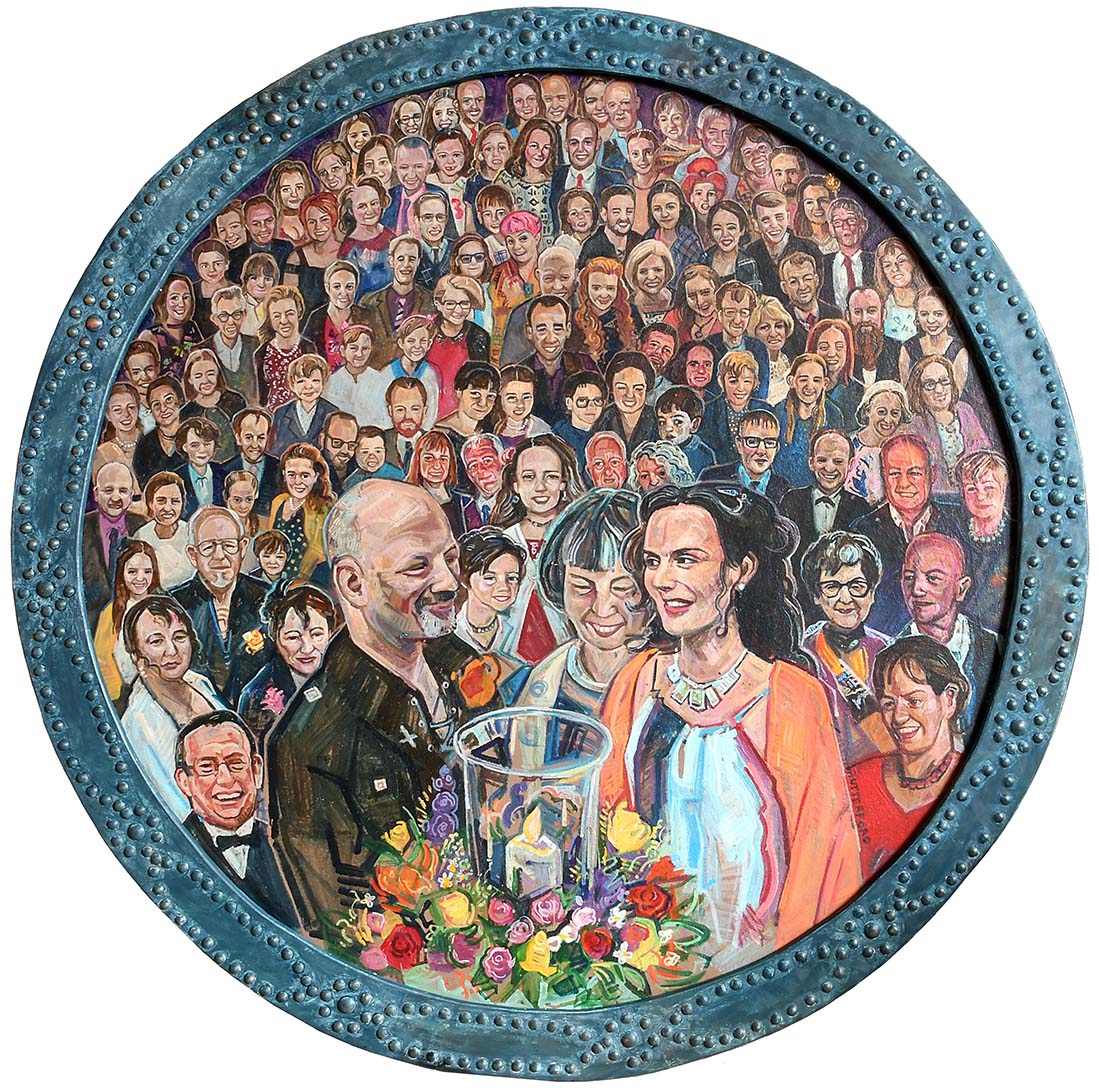 I have been a friend of Carole Racionzer for some time now and several years ago she also bought my 2012 portrait of my cousin Anna Rendall playing the cello.

I was delighted to learn that she was getting married to Stan in 2017, and when she asked if I could paint a picture as her main wedding present I was happy to help. The idea was that instead of her guests buying wine glasses or kitchen paraphernalia as presents, as a unique and personal alternative they could all chip in for a custom painting. I have long thought that many wedding photographs end up being quite formal, posed and lacking in soul. A party painting like the ones I am known for could provide a lasting memento of the day and it would also reflect the life and joy of their wedding celebration.

I decided to paint portraits of all the wedding guests as well as the main wedding party. Carole and Stan hosted their ceremony at Archerfield House in East Lothian, with a handfasting ceremony led by a Humanist minister and their guests arranged around them. It was decided that I would make a picture of that scene and build it on a circular canvas that reflected the shape of the ceremony. I gathered reference photos of the happy couple during the ceremony and then took pictures of as many wedding guests as I could get to pose at the time. I then went down to the reception venue and started the painting in full view of the guests. Throughout the day this painting process provided unique on-site entertainment for the wedding guests; I painted the main wedding party first, starting with the bride and groom before painting Carole’s daughters, the best man, the matron of honour, and the parents of the happy couple. People of all ages are fascinated by the process and the openness of how I do it, and wedding guests were constantly hovering around the easel, watching my progress.

To add to the ambience of my workspace, I brought four large boards of crowd scenes from my 2013 Hogmanay painting. This gave the guests an idea of the direction in which the wedding painting was going.

After the event the picture was taken back to the studio in Leith and the longer process of painting all the guests in began.

Once finished it was popped in a custom-made frame to be presented to Carole and Stan and hung in their Perth home. Job done!

In  October 2016 I was asked by Edinburgh-based Double Take Projections (who specialise in large-scale projections nationwide) if I would produce some paintings specifically to create some time lapse footage for the city of Norwich’s 2016 Christmas celebrations. As Double Take Projections are top professionals in the field with a track history of success, the Norwich Business Improvement District (BID) approached them to “paint” a number of local landmark buildings with projected animations and time-lapse footage.

Painting in front of time-lapse cameras has become an intrinsic part of my working practice over the past few years. Working in collaboration with editor Mettje Hunneman, I have now produced more than 20 short films which document my work process in this way. In addition to being a great publicity device and adding to my social media profile, I also find that the presence of time-lapse cameras provides me with added creative focus. The performance element of producing paintings on film keeps me engaged with the canvas and it forces me to be braver in my output. Furthermore, filming encourages me to keep working regardless of physical discomfort or tiredness, thereby increasing my productivity.

For three days at the end of October I painted in the studio while dressed as Santa (complete with a partially moulting fake white beard) while cameraman Adam Robertson kept a watchful eye on proceedings.

The images grew exponentially in size as the days rolled on; I began with an A0-size evolving painted Norwich BID logo, followed by a Norwich street scene measuring four feet by five feet, before finishing with an eight foot by twelve foot mini mural designed as a massive Norwich-themed Christmas card. I painted Santa himself in the the background and local celebrities Delia Smith and Stephen Fry pulling a cracker in the foreground. The conceptual idea was that the live action Santa ‘character’ (me) would begin as just a hand in the frame while painting the logo, but then would become increasingly dwarfed by the painting as the film unfolded.

All the years of event painting proved to be very useful in this venture as I now know that the camera likes me to act decisively, and ideally I need to make big decisions as I go. It was also nice to find a different format for that experience with this project.

In late November I visited Norwich for a day while en route to London, in order to see the projection installed in the city. It was most bizarre to see myself on such a large scale, even if I was in my Santa disguise. I have friends in Norwich who will have to look at Santa’s bottom for the whole seven week run and know that it’s me, which can only increase their festive cheer.

The main thing is that the footage and the animations that Double Take Productions created alongside the mural looked fantastic, and it came together to help create exhilarating and atmospheric new Christmas festivities in Norwich. For me personally, it’s really exciting that my time-lapse experiences can combine so seamlessly with my illustration skills. The footage that we generated was almost instantly created in conjunction with the computer animations and it really increased the quality of the product and the feeling of joy in the whole city. 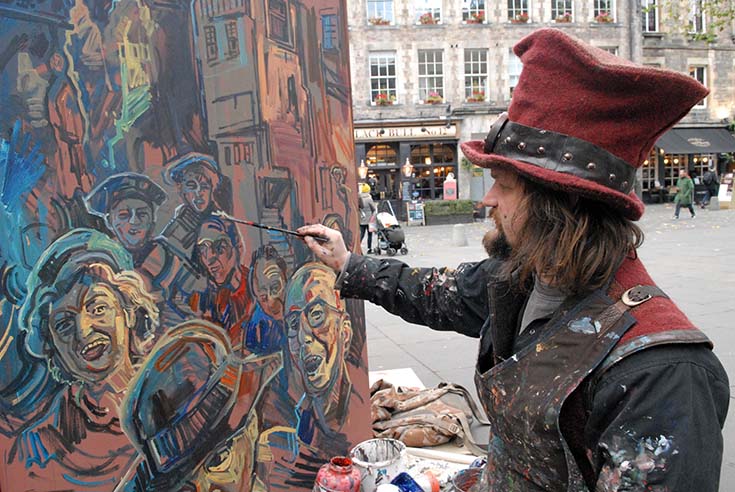 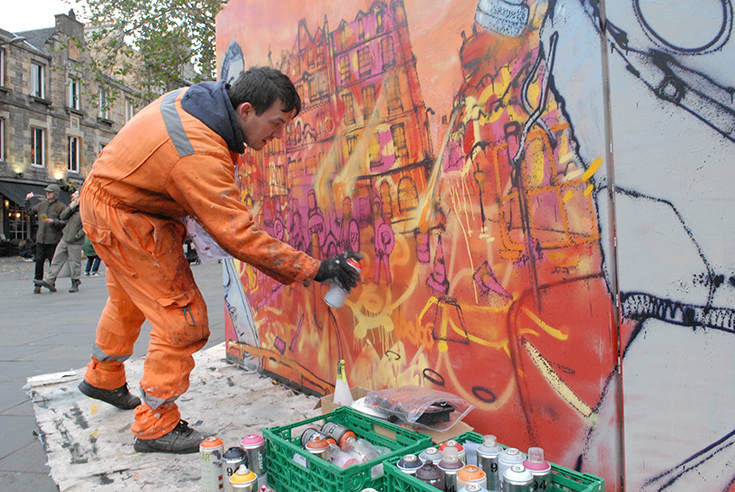 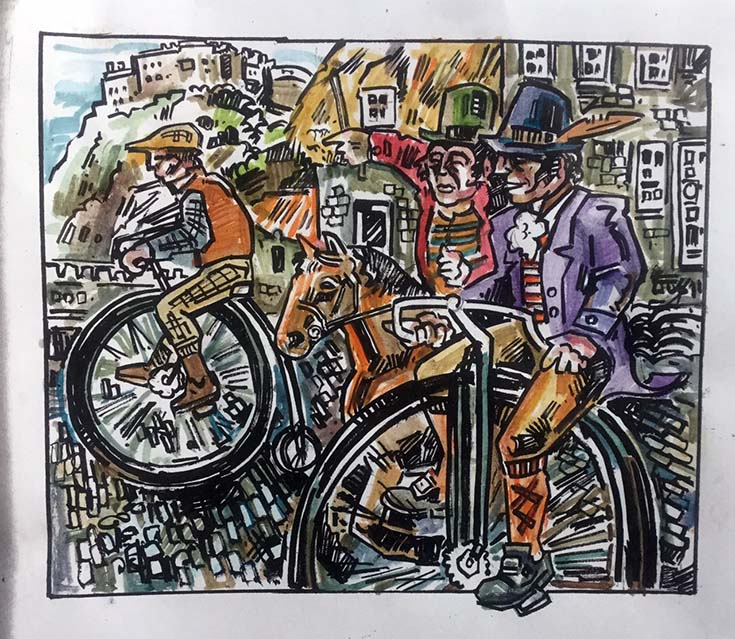 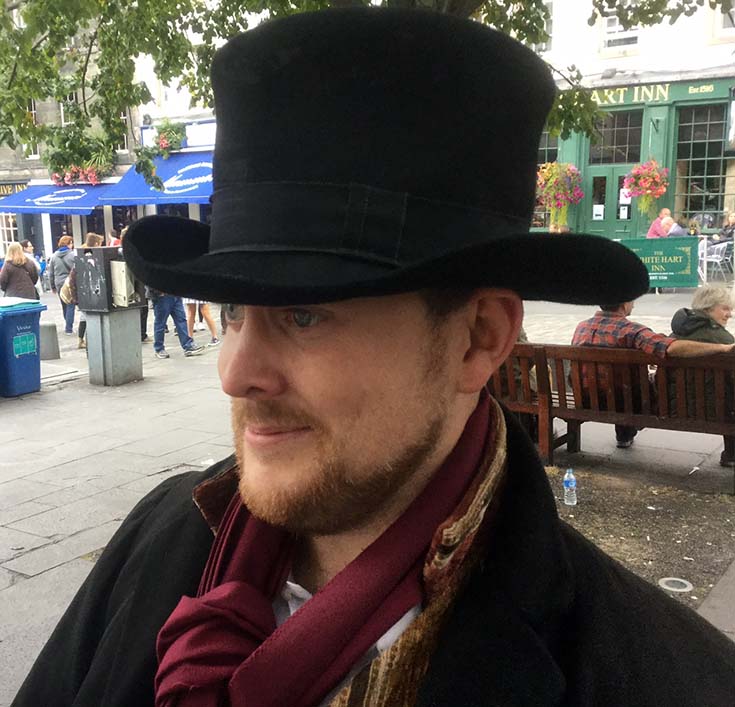