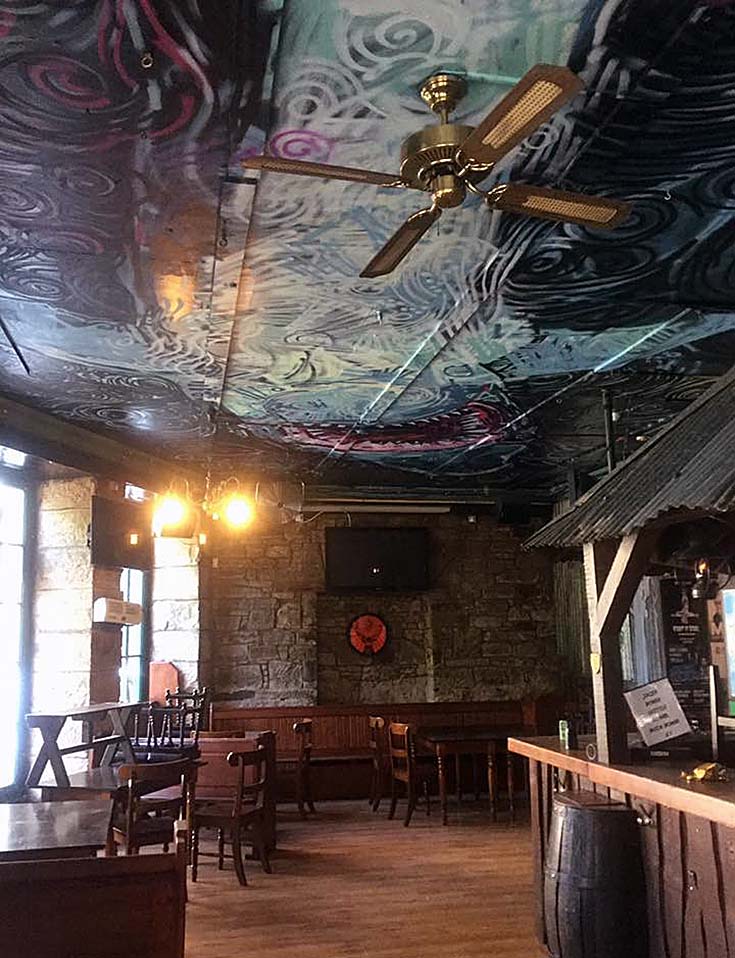 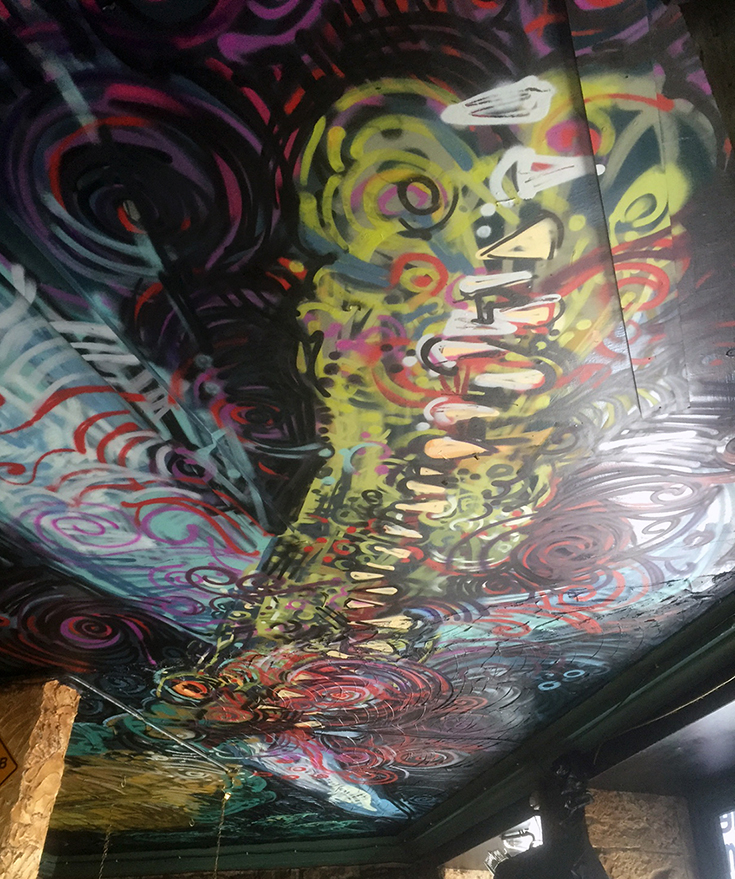 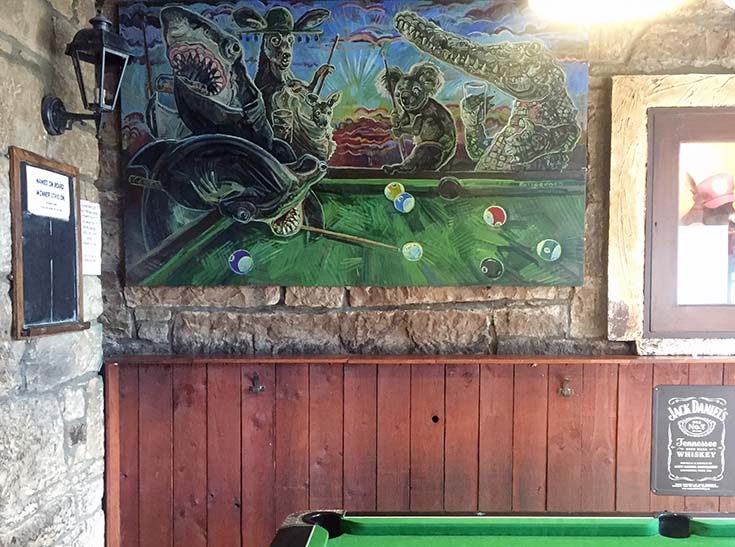 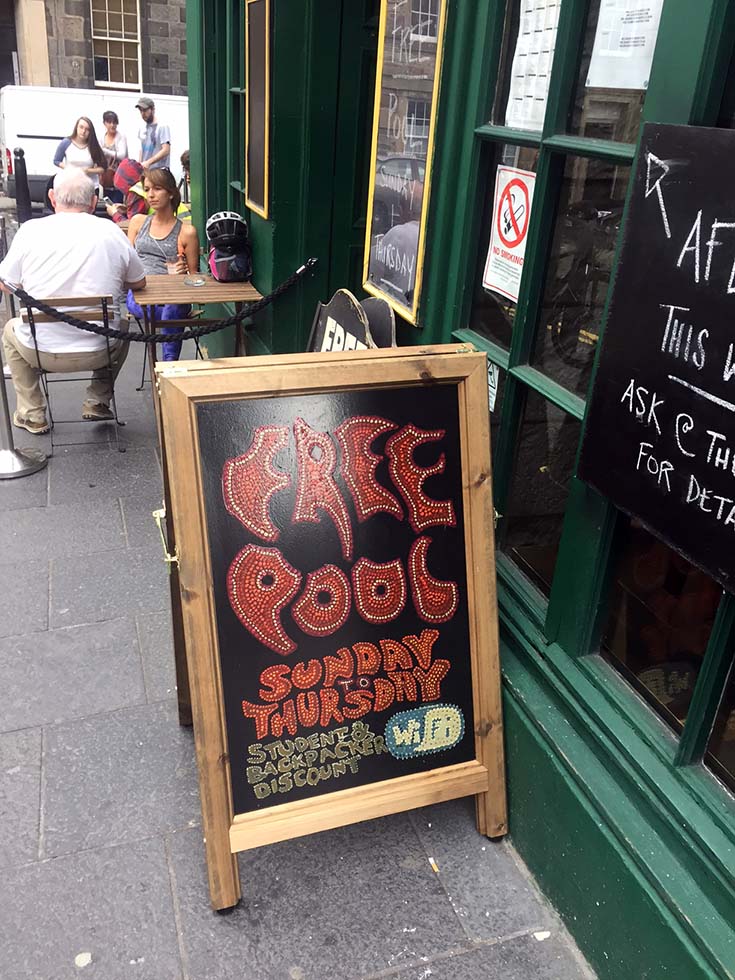 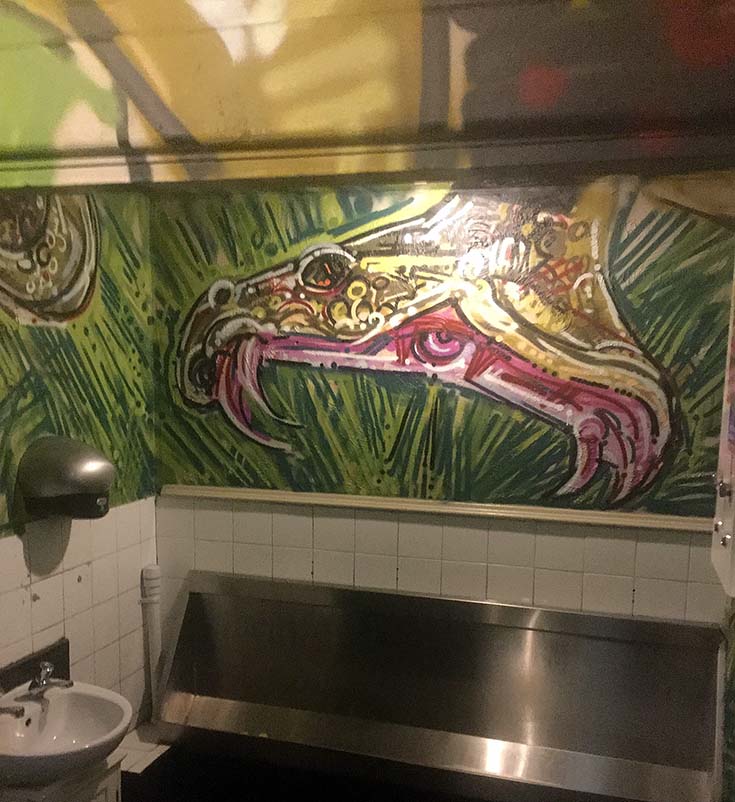 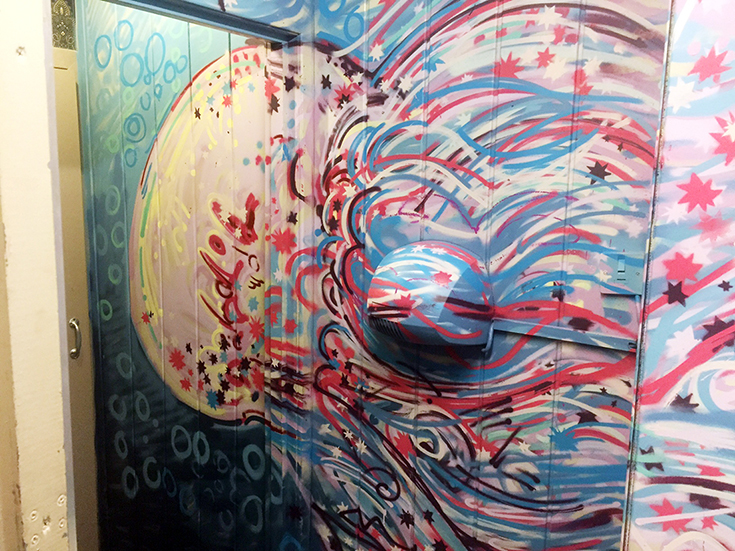 Galashiels is a Scottish Borders town with a strong history and a heritage of Victorian artwork. However, like many modern towns, it’s been swamped by a uninspiring mix of generic national chainstore shop fronts which dominate the urban landscape but offer no site-specific Gala-related imagery.

A local group of citizens called ‘Energise Gala’ approached me asking if I had any ideas on how to improve the area. I have a real interest in the idea of space changing, whether it be transforming interior rooms or exterior areas of towns. This seemed fantastic opportunity to start changing the visual narrative of the town for the better.

Galashiels recently gained a new rail link which is a major bonus to the town, but its physical gateway is not massively welcoming at the moment, and it has been looking a bit bedraggled. The iconic Flying Scotsman train visited the town in May 2016, which proved to be a major event in the area, and so we decided to use this theme in creating a brand new gateway mural. It seemed like a positive and dynamic metaphor at the centre of the picture, and as luck would have it, we found an available wall in an ideal location just over Douglas Bridge on the entry to the town.

Including the community in the very fabric of the painting was vital to project, so I decided to build one of my crowd murals alongside the image of the Flying Scotsman and cast the locals in the crowd scene. After preparing a basic train painting in Edinburgh, we threw a launch event in Gala where I gathered lots of locals’ photo reference for the portrait painting. Some young people from the community also helped paint in the event and a small team from Energise Gala made the photo references.

If you want to see the mural in progress, it is currently housed in the Tron Kirk on the Royal Mile in Edinburgh. I’ve almost completed using all of the photo reference that I gathered during the launch weekend and am now opening it up so the general public can sign up if they want to be included in the crowd scene. It will be my main project throughout Edinburgh festival 2016. The plan is to have the picture finished and hung in Galashiels at the October 2016 ‘Creative Coathanger’ event – a festival of all things design and the creative arts.

Many of the visitors to my 2013 art exhibition turned up wearing Top Hats. Fabhatrix in the grassmarket must have been totally cleared out!
I got them to pose in front of my paintings to give a sense of the scale of the work….and because it was fun.

There are a lot of effortlessly stylish folk in my town!

On the 15th of November I featured on the Scottish news. The article was about the Tam O Shanter mural at the Burns museum. If you missed it- here it is.

I hung the jacobite Stramash in the Netherbow Museum as part of their Jacobite season alongside the Prestonpans Tapestry. Perfect location as the tower in the background of the painting is the Netherbow Gate. It was really nice to bring it home. Coincidentally they had reenactors playing out the story of the storming of the Netherbow, the scene thats depicted in the painting, 17th September 1745. All very exciting and a bit surreal. I decided that if there were reenactors there I wasn’t going to wear my kilt and come of second best so I wore tweeds. But thought I didn’t want to miss out on all the fun so I wore one of the wigs from the paintings production all day…. maybe its time for a perm? Ross the master piper who featured in the picture and wore a mad professor baldy heid came in full regalia and played for the gallery, he even got a shot as a reenactor. I knew I should have brought my claymore.

2011’s Art Complex Show focused on a spectacular Tam O Shanter painting. As usual in the arts complex shows I was working on it live in the show. I got a body of work completed and entertained the crowds, also made the local news. The funniest thing is that we hung the mural inconspicuously in the far side iof the gallery. Some people would wander in oblivious to its existance and physically shriek when they rounded the corner. Its a shock to the system when you’re mugged by a fourteen meter painting, the elephant in the room. As usual I was filming the picture being painted and we had a video of its production projected onto the wall, proper art galleries feature tellies.

I also fired off an email to Lorraine Kelly and being a gallous lass she’s agreed to be the bar maid in the pub scene – celebrity involvement! Here are some of the highlights.

On 16th July 2010 I had my first solo show at The Arts Complex in Edinburgh. It featured a broad range of work from seven years of metamorphosis from illustrator to artist much of which is featured on this website. Kind of like a premiere retrospective.

The title of the show had a double meaning, from one of my favourite proverbs. ‘It is the open hand that clutches the tightest.’ I believe applying marks quickly, leaving the bones exposed allows for maximum emotional impact. Also it more obviously refers to the opening hand in a game of cards.

Here are some piccies.

When the cowparade came to Edinburgh in 2006 I was commissioned to decorate one of the cows. I really wanted to paint a green cow festooned in massive flies, lying down and call it ‘Pat’ . (A cow -‘Pat’ I still think that’s funny)

The commissioners preferred this idea of a Highland bull in a kilt. I poured around 100 man hours into painting the kilt alone but I think it was worth it, he truly was totally bad assed. He was the only boy on show. I turned the cows udder into a sporran and gave her a sex change. In future though, I’ll buy kilts not paint them.
When the cows were auctioned at the end of the parade he was the fifth highest grossing cow out of some hundred that were put up for sale.

Subsequent to that I was commissioned to repaint another two of the cows as highland warriors. (no kilts) It’s an odd feeling walking into that garden and feeling them eyeballing you. Even though I know they’re fake on a gut level it makes me nervous.

I think it a pity the Victorian historical painting has gone out of fashion. It was their equivalent of the grand movie experience and unveilings used to attract queues round the corner. It is also something one man can have a go at, you don’t need permission. Just a big wall. In 2009 I had a shot, as much to set myself a challenge as anything else.

The painting is three and a half meters tall and two and a half meters wide. It was originally conceived stretched onto batons on a wall at Leith School of Art, then I took it into my garage and draped it up the wall and onto the ceiling. At this time I managed to resolve the composition and get the colour balance right prior to it being hung in the Leith School of Art show. Personally I was unhappy with the finish of the individuals in the crowd. They looked like ghosts of people and cartoons rather than proper individuals, so in the time honoured fashion I went in the huff…

Until… just before the dawn of my first solo show. The Opening Hand. I decided that instead of twiddling my thumbs and watching the show unfold it would be better to finish the painting in a live event. Get the visitors to pose for the characters in the picture. So that’s what I did. Painting live models into the scene was a much better laugh for all parties concerned. Wigs, fake beards and all! The picture finally reached a logical conclusion. Better late than never.

When I started painting the Jacobite Stramash again it didn’t even have a name! The faults in the image as far as I was concerned were many and varied. There were some hundred figures in the painting and they weren’t good enough. I decided that it was important to get models in to pose. Both to enliven the exhibition and provide a hook for the event but – more importantly to breath life into the crowd and turn it into the party I had imagined in the first place. I managed to get a shout out on STV and in the evening news requesting models.

Here are a selection of snaps of some of the loons I snared to thicken the plot. Some of the shots are from my studio as it didn’t quite get finished in the show.