In 2015 I continued my collaborations with the Scottish culture and heritage organisation Clanranald trust for Scotland. Members of the Clan had previously appeared in my Battle of Bannockburn painting, most notably the Clan Chief Charlie Allan, who took the role of the King, Robert the Bruce. Since 1995 the Clan have been building the Duncarron Medieval Fort in the Carron Valley near Stirling. This project has been funded in various ways, including starting the Scottish rock group ‘Saor Patrol’, and creating ‘Combat International’; a group of combat re-enactment specialists and actors who appear in major motion picture films. They also host themed weekend events throughout the year, both at Duncarron Medieval Fort and in other historic venues.

In 2015 I was asked to appear at their pirate festival and I painted a bespoke 20ft long pirate mural. It was another of my crowd murals, with the idea that the pirates being depicted would be contained in two longboats. I wanted to paint the boats as their own little worlds, being tossed about on the seas of fate. The event lasted two days and visitors to Duncarron were encouraged to buy raffle tickets in order to be included in the mural, alongside splendidly costumed Clanranald members. The painting was finished in Edinburgh’s Tron Kirk in early 2016, with many Tron stall holders being painted into the mural too.

As a postscript to this painting, several months later I appeared on BBC Radio 6 Music on Radcliffe and Maconie's ‘Chain’ segment and as fate would have it, Mark Radcliffe happens to be part of a pirate-themed band called Galleon Blast. After hearing my banter and visiting my website, Mark thought that the pirate mural would be ideal for the band’s second album cover. He asked if they could use it and I was of course delighted to help as I've been an avid listener to his radio shows for 20 years. To make the painting even more appropriate, I painted the members of the band and their instruments into the longboat too, bringing some music to the scene. The album will be released in 2017 and has now been renamed 'A band on ship' due to the nature of the cover.

In 2016 I took this painting along to Clanrananld’s next pirate event, this time held in Culross Palace, a late 16th - early 17th century merchant's house in Fife. The first mural really brought a feeling of the sea to the reenactment that the Clan had laid on. Throughout the Culross event I painted a new eight foot scene, celebrating many of the colourful characters at the event. The idea was to paint the pirates as though they were on the decks of the ship from the larger first painting.  It's always a delight to work with the Clan; their vivid costumes and engaging personalities make painting historic murals really easy. Over the last few years it feels like I've become a satellite member of their troops with my own very specialist eddy and I look forward to working with them more in the future. 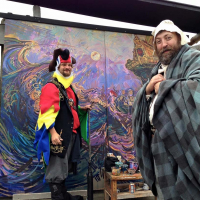 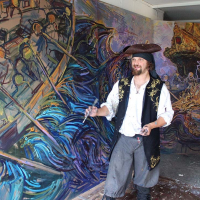 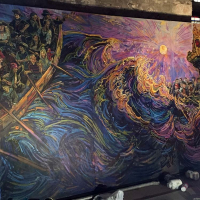 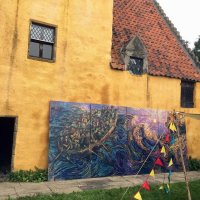 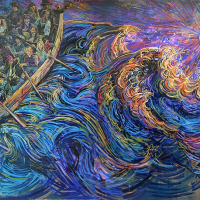 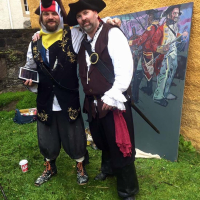 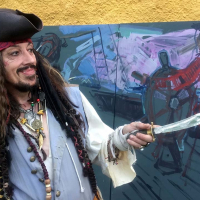 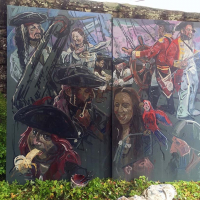 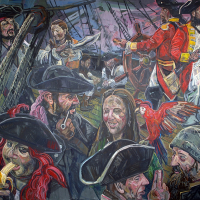